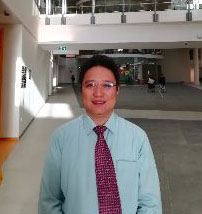 According to Dr. Vincent Chan, his fondest learning experience started at Penn when he embarked upon his doctoral study under the tutelage of Professor David Graves in 1993. Penn’s highly interdisciplinary research and extensive resources provided immeasurable opportunities for the study of molecular biotechnology. Vincent studied under Professor Steven McKenzie and Professor Paolo Fortina, both of whom are clinician-scientists at Children’s Hospital of Philadelphia (now at Thomas Jefferson University). He especially appreciated the fact that he was exposed to different teaching styles and learning methods from Penn’s world- renowned educators, like Emeritus Professor Eduardo Glandt’s Thermodynamics course, the unique organizational approach of Professor Ray Gorte in mathematics, and the inquisitive methodology of Professor John Vohs in kinetics.

After receiving his Ph.D. from Penn in 1997, Vincent joined Genome Therapeutics Corporation in Boston, a biotechnology company which focused on the integrative applications of genetics and informatics for drug target identifications. From 2000 to 2016, he has traveled to South East Asia to teach in three engineering disciplines, including mechanical engineering, chemical engineering, and biomedical engineering at Nanyang Technological University in Singapore. During this time, he also served as the Deputy Head in the Division of Chemical and Biomolecular Engineering from 2007 to 2010. From 2010 to 2013, he served as Associate Chair in the School of Chemical and Biomedical Engineering, and managed two academic programs with over 1,000 students. Since September 2016, he has assumed his new role as Professor in the new Department of Chemical Engineering at Khalifa University of Science and Technology in United Arab Emirates.

To date, Vincent’s research in biointerfaces and integrative biomaterial systems has led to 85 publications in peer-reviewed international journals. Vincent believes the biggest achievement he has accomplished so far is mentoring two of his former Ph.D. students as they move forward in their respective academic careers.