Victor Ngo, ChE’15 at PowerAdvocate as an Energy Consulting Associate 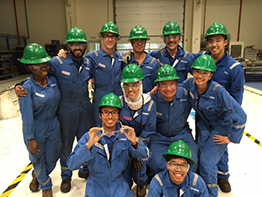 Victor Ngo, ChE ’15, started a position as an Energy Consulting Associate with PowerAdvocate, located in San Francisco, California. At PowerAdvocate, Victor works on projects for energy clients focusing on strategic sourcing, cost and spending analysis, as well as market and supplier intelligence. PowerAdvocate deals mainly with supply chains of their clients, which include utility companies, refineries, and upstream oil and gas companies.

Throughout 2016, Victor spent time in Al-Khobar, Saudi Arabia at Schlumberger (a leading provider of technology for reservoir characterization, drilling, production, and processing to the oil and gas industry) as a Wireline Field Engineer. In this role, Victor made site visits to various drilling rigs to run wirelines and tools into wells which, with the assistance of computers, allowed him to generate data about the wells, including what fluids were present, what kind of formations existed and the depth of interest zones. Before starting his research at Schlumberger, Victor spent 3 months in a training course in Abu Dhabi, UAE to prepare him for this experience.