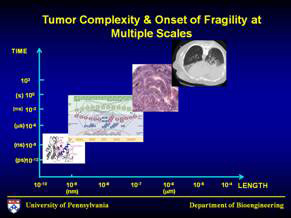 Drug Efficacy and Development of the Oncosimulator

“It’s like looking for a needle in a haystack,” says Ravi Radhakrishnan.  “We don’t even know what we are looking for.”  What he wants to know sounds simple: why a drug therapy for non-small cell lung cancer and glioblastoma (cancer of the brain) works in only about 5 percent of the population receiving the treatment.  The 5 percent, however, share mutations in a protein called the epidermal growth factor receptor (EGFR).  The majority of patients (95 percent) without the “good” mutations do not respond to the drug treatment.

Subtle Difference, Profound Effect
It’s a “subtle difference,” says Radhakrishnan, assistant professor of bioengineering.  “Why does it have such a profound effect?”  Radhakrishnan has teamed up with cell biologist Mark Lemmon, chair of biochemistry and biophysics at Penn, and neuro-oncologist Thomas Deisboeck at Massachusetts General Hospital to find out.  “Where,” Radhakrishnan wants to know, “is the origin of specificity?”  Since the drug ultimately targets a particular protein and the cancer manifests itself in an organ, where along the pathway from drug to molecule to cell to tissue to organ lies the answer?

Radhakrishnan heads up the Molecular Systems Biology Laboratory.  His research lies where chemical physics and molecular biology intersect.  He calls himself a modeler.  Taking the wealth of data on EGFR, he is probing the molecule-to-cell part of the question computationally, while Lemmon performs the cell experiments.  Deisboeck does both the models and experiments for the tissue and organ (the tumor site).  With all the possible genetic and epigenetic variations and the millions of proteins in our cells that also differ, it would be impossible to make sense of the problem without modeling, Radhakrishnan explains.

2020: The Oncosimulator and the Center for Virtual Tumor
His model will also be a part of a larger project, led by Deisboeck, called the Center for Virtual Tumor.  By 2020, the project members plan to have developed an oncosimulator that will be able to simulate the microscopic progression of cancer cells.  Without such a tool, a surgeon cannot intervene in many cancers before it is too late—for the brain, a tumor the size of a millimeter is already too large.  The collaborators hope that the oncosimulator will be used for clinical trials, eventually giving surgeons a better way to know when to intervene—at cancer stages too early even to detect—before it is too late.