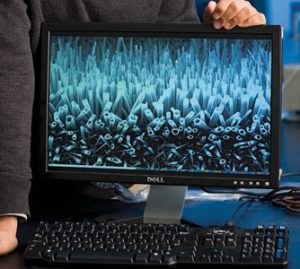 The race to create next-generation computer memory devices that are off-the-charts smaller, faster and more stable than current memory technologies has entered promising new territory thanks to recent innovations in Ritesh Agarwal’s lab.

Agarwal, Assistant Professor in Materials Science and Engineering, has pioneered a technique for fabricating self-assembled nanowires. His breakthrough was published in October 2007 in Nature Nanotechnology and was noted by MIT Technology Review as one of the top five biggest advances in nanoscience in 2007.

The Agarwal lab’s innovative technique allows for the selfassembly of nanowires with phase-change memory that’s 1,000 times faster than conventional flash memory (typically used in digital cameras, memory cards and personal data assistants) and 10 times more energy-efficient than thin-film phase-change memory devices. Devices crafted from these nanowires will offer the advantage of terabit-level memory density in a non-volatile format, meaning that information is retained even when power is removed.

Prior to Agarwal’s nanoscale discovery, the 100 nanometer barrier to miniaturization had stymied the computer industry. Nanowires created by the Agarwal lab are 20 nanometers in diameter (one thousand times thinner than a human hair) and 10 micrometers long. By comparison, the lithographic process used to fabricate phase-change memory storage on thin silicon hasn’t worked reliably for structures thinner than 100 nanometers, says Agarwal. “You couldn’t make them at that small size without damaging them.”

According to Simone Raoux, Ph.D., a research staff member at the IBM Almaden Research Center, “Dr. Agarwal’s most important research contribution has been to show us that phase-change technology can be developed down to the 20 nanometer size of the element and that it will work. This is very promising for the development of phase-change memory, an emerging technology that could potentially change the memory technology landscape and market. This research is extremely relevant because it tells us how small we can build devices in the future.”