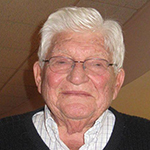 Alvin H. Weiss, Ph.D. graduated from the University of Pennsylvania with a B.S. in Chemical Engineering in 1949. His first job was with Fiber Chemical Co., a specialty chemical company. During the Korean War, he served as a PFC in the Army Chemical Corps for two years. Upon his discharge, he earned a M.S. in Chemical Engineering at Newark College of Engineering, while taking evening classes and also working at Colgate-Palmolive Corporation, where he developed the spray-drying process for AD synthetic detergent.

In 1955, he began research in the fields of catalysis and kinetics at the Houdry Process Corporation, and invented both the LITOL and DETOL processes for producing chemically-pure benzene, on which he published extensively. In 1965, Dr. Weiss returned to Penn as a research associate at the Institute for Cooperative Research. During this time, he also taught in Chemical Engineering, and earned a Ph.D. in Physical Chemistry. In 1966, he served as a Professor of Chemical Engineering at Worcester Polytechnic Institute, and founded the Catalysis Society of New England. During this time, he also began his academic research career with both a grant from Exxon, and Summer Faculty Fellowships for research on space flight at the NASA Ames Research Center.