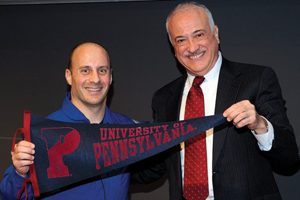 Dr. Garrett E. Reisman, NASA Astronaut and Penn alumnus, returned to Penn Engineering in February as the distinguished speaker for the Business, Technology and Government Lecture Series. Reisman’s inspirational lecture, “Living Aboard the Space Station—One Quaker’s Journey,” detailed his three-month mission on the International Space Station. Reisman is a graduate of the Penn Management and Technology Program and holds a B.S. in both Mechanical Engineering and Applied Mechanics from Penn Engineering and in Economics from the Wharton School of Business. After graduating from Penn, Reisman went on to earn his Ph.D. in Mechanical Engineering from the California Institute of Technology.

Reisman told a packed auditorium of Penn Engineering students, faculty and staff that he is “standing on many people’s shoulders” and that his success is the result of professors and mentors who inspired him to become an engineer. While at Penn, Reisman explored many possible career paths, but a class with the late Dr. Ira Cohen, Professor of Mechanical Engineering and Applied Mechanics, caused him to become “hooked on fluid mechanics.”

Earlier in the day on the first floor of The Moore School where ENIAC was built and now displayed in part, Reisman re-attached a control knob from the world’s first large scale, general-purpose, electronic digital computer. Reisman had taken the knob into space as a tribute to Penn Engineering’s contribution to computing and technological innovation, without which space flight would not have been possible.

At the end of his talk, Reisman presented Dean Eduardo Glandt with a Penn pennant, which he had proudly displayed on the wall of the Space Station during his three months in orbit.