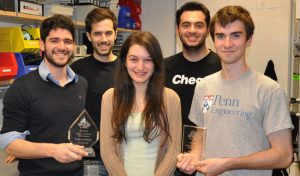 For the second year in a row, Penn’s iGEM team is the winner of the North American Regional iGEM competition, which was held on October 4 to 6 at the University of Toronto, Canada. Held by the International Genetically Engineered Machine (iGEM) Foundation, the iGEM competition is the premiere undergraduate Synthetic Biology competition. Student teams from over 200 universities worldwide are given a kit of biological parts at the beginning of the summer, and working at their own schools through the summer, they use these parts and new parts of their own design to build biological circuits in living cells. The Penn team placed ahead of 63 other leading universities including MIT, Stanford, and Berkeley to win the North America Grand Prize.

Team members for 2013 are Daniel Cabrera (Computational Biology), Danielle Fields and Bradley Kaptur (Bioengineering); Josh Tycko (Biological Mathematics); and Mahamad Charawi (M&T).  In the first week of November, the Penn iGEM team will travel to MIT to face off against the top teams from the other regional competitions around the world at the iGEM World Championships.

The team’s project this year was directed at advancing the field of epigenetics. Epigenetic phenomena modify DNA and control gene expression; while the various cell types in our bodies such as heart and brain cells possess the same underlying genetic code, epigenetic modifications can dramatically impact how that code is executed.  Disruptions in epigenetic processes have been implicated in many diseases such as cancer, in which certain genes have abnormally low DNA methylation levels (a type of DNA modification).

With this in mind, the 2013 Penn iGEM team set out in May to find new ways to precisely target DNA methylation, but encountered two problems: there were no tools available to achieve targeted DNA methylation, and there were no easy ways to measure targeted methylation. Over the course of the summer, the team created a three component toolbox: an engineered enzyme which can precisely methylate a gene of interest, an easy-to-use measurement tool to analyze whether targeted methylation has occurred, and a software package which can analyze the data (which made its debut at the Fall 2013 PennApps Hackathon).

Collaboration for the Win

Perhaps what is most impressive about the feat is how much the students grew over the summer: not a single one of them had the molecular cloning experience needed to succeed in a synthetic biology competition.  Enter Penn Genome Frontiers Institute (PGFI), who hosted the team with a special one-week boot camp in molecular cloning, led by Staff Scientist Adam Peritz, PhD.  “It is a wonderful example of how Penn’s many resources can be bridged and allow for a successful outcome for our students,”  notes team adviser, Brian Chow, assistant professor of Bioengineering.

In addition to Chow, team mentors also included Sevile Mannickarottu, Director of Instructional Laboratories in Bioengineering;  Spencer Glantz, a doctoral student in the Chow Laboratory; Michael Magaraci and Avin Veerakumar, team co-founders who were part of last year’s winning team and are now research technicians in the Chow Laboratory; Jordan Miller, a former postdoc in Chris Chen’s laboratory and now an assistant professor of Bioengineering at Rice University, and Orkan Telhan, assistant professor of Fine Arts in Penn’s School of Design.

Chow cites the importance of contributions from throughout the University, notably continued support from Penn’s Office of the Vice Provost for Research and the School of Engineering, and the significant use of School research facilities, particularly the Bioengineering department’s Stephenson Teaching Lab, where the students conducted their independent research.  “With iGEM, Penn has collectively created a special innovation environment, enabling students to truly own their projects, from idea conception to research execution,” Chow says.

Tycko concurs, “iGEM is really unique because the undergraduate team is given so much freedom to be scientifically creative and see their ideas through from beginning to end. We aren’t experts, so some of our ideas completely flopped at first. But I think that freedom to fail provided the learning experience we needed to achieve our eventual success.”

Founded in 2011 by a highly dedicated group of undergraduates in Bioengineering, Penn iGEM is a program devoted to undergraduate-led innovation in synthetic biology that is open to all students from all schools at the University of Pennsylvania.

The 2013 team’s research and travel was sponsored and supported by the School of Engineering, the Office of the Vice Provost for Research, the Mack Institute for Innovation Management at the Wharton School, the Jerome Fisher Program in Management and Technology, Penn Genome Frontiers Institute (PGFI), and the Center for Undergraduate Research and Fellowships (CURF). Industry sponsors included Addgene, Biomatters, Integrated DNA Technologies, and New England Biolabs, who generously provided research materials to the team.

The 2013 team’s webpage can be found here. Students interested in joining next year’s iGEM team should contact Dr. Chow.