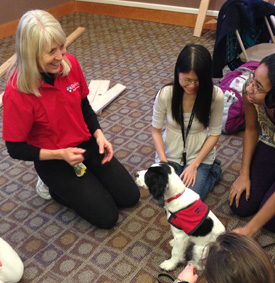 The Department of Bioengineering celebrated Engineering Week in February by sponsoring several events, including one with a special canine visitor from the Penn Vet Working Dog Center (PVWDC).

During the event, undergraduate students from the Departments of Bioengineering and Mechanical Engineering and Applied Mechanics joined together to build a scent wheel for PVWDC. A scent wheel is used to teach the dogs at the center how to approach the correct source of a smell, which helps the dogs improve their detection skills. Building the device required the engineers to work as a team, drawing on their existing expertise and learning a few new skills along the way. 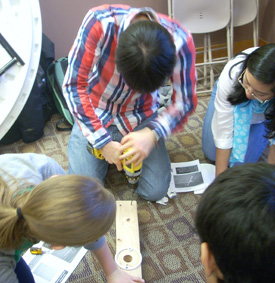 The inspiration for the event came when BMES and the Rachleff Scholars started seeking a hands-on community service project for the undergraduates in Penn Engineering. Liz Feeney (BE’14), the president of BMES, immediately thought of her rewarding experiences volunteering for PVWDC this past year. “Agility and training equipment is very important to helping the dogs become detection dogs, and we saw this as a great opportunity,” Feeney said.

While the engineers were building the scent wheel, McBaine frequently tried to join in, picking up some of the wood in his mouth and proudly running around the room. The puppy also showed off some of his impressive skills with the group, including finding a hidden toy underneath a pile of book bags and jackets.

“McBaine was the star of the event,” Feeney said.

Thanks go to the leaders of BMES, the Rachleff Scholars, the Penn Vet Working Dog Center, and PVWDC volunteer coordinator, Pat Kaynaroglu, for helping to coordinate this fun and educational event.