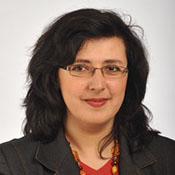 Panagiota “Penny” Dilara ChE’95 is a Policy Officer for Motor Vehicle Emissions at the European Commission DG-GROW in Brussels, Belgium. Her work focuses on correcting emission issues with auto manufacturers that have not complied with the federal anti-pollution laws in the United States. She and other policy officers at the European Commission DG-GROW try to improve how the system works in Europe, and find new ways to ensure that violators are held accountable. Penny states that the system built by the US-EPA is a great inspiration for the European Commission DG-GROW, but they are working to take things a step further. “Soon, in Europe, even independent testers will be able to test cars on the streets and identify overemitters. ”

Penny was previously a researcher in the Joint Research Centre (JRC) of the European Commissions in Ispra, Italy where she worked for 20 years in the fields of transport and energy. She led various groups of JRC scientists working in the field of air quality modelling, emission inventories, road-transport emissions modelling and, finally, modelling for electromobility. For more than 10 years, she has served as the Transport Panel Leader within the United Nations Task Force for Emission Inventories and Projections.

Penny’s work in the JRC has focused both in the experimental field, with the validation of the number counting method for particle emissions, as well as in modelling and simulation. She received the JRC Award for Policy Support in 2007 for her work in the EURO 5 car emissions legislation.