On and Off the Mat With Scholar-Athlete Mike Steltenkamp 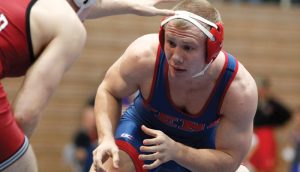 “Once you have wrestled, everything else in life is easy,” or so said legendary Olympic gold medalist and Iowa University wrestling coach, Dan Gable. Does this include working toward a degree in Mechanical Engineering at Penn?

Mike Steltenkamp, a Penn Engineering senior and Penn wrestler, recently considered the quote and found a good deal of truth in it. But even as the sport, for him, “consumes body, mind and spirit,” it has rewarded him with myriad skills and lessons he can apply to the game of life. Along with extreme attention to detail while looking at the larger strategy, Steltenkamp has developed the quality of self-discipline.

In wrestling, the known rigors of serious athletic training are complicated by the ongoing challenges of making weight for each match. Wrestlers of all levels traditionally compete at a lower weight class, theoretically gaining advantage over their opponents. This often necessitates cutting weight to qualify.

Although aware of the dangers of dehydration and caloric self-deprivation before a match, it is the cultivation of a disciplined lifestyle that seems to be Steltenkamp’s guiding principle. A competitor in the 174-pound weight class, his sensible approach to weight management is, understandably, a point of pride with him.

Not for the Faint of Heart

Penn’s wrestling practice schedule is most definitely not for everyone: six days a week, with two practice sessions a day on four of those days during the season. At the gym at least 10 times a week for weightlifting, conditioning and wrestling drills while attending engineering classes as a master’s submatriculant, putting in hours as a Teaching Assistant and serving as president of the Alpha Tau Omega (ATO) fraternity adds up to an arduous schedule. As Steltenkamp puts it, it’s all about “drive: nine to five.”

Driven, yes he is, but others also describe him as dedicated. As a high school wrestler in Bloomfield Hills, MI, Steltenkamp was twice awarded the Coaches Medal for dedication. When asked for his thoughts on having won the award, Steltenkamp expressed his belief that he was being recognized for his efforts in bringing new or inexperienced team members into the fold and teaching them what there was to know. In other words, he not only embodied but also passed along the spirit of the team.

Perhaps it was having acted as a mentor during those years that made him a natural for the SEAS Freshman Alumni Mentoring Program as a mentee. Whatever the attraction, Steltenkamp is glad he signed on. The program pairs an alumni mentor with a first-year engineering student for one year.

Steltenkamp’s experience in the Mentoring Program illustrates the success of the program and the power of Penn connections to provide guidance and inspiration. His network originated with his assigned mentor, Guido Gaeffke, ME’82, who put him in touch with Bruce Tassone, ME’82, WG’86. The introduction resulted in his working for Tassone’s engineering firm, Engine Cleaning Technology, Inc., in Bridgeport, PA, over the summer of his freshman year.

The experience, according to both, was 100 percent win-win. As Tassone sums up that summer, “It turned out to be a great success story. Mike showed an immediate commitment to our business and positively contributed by developing a number of value engineering processes. We only wish he could have stayed a while longer, but he had to get back to the Towne Building for classes!”

Steltenkamp’s most recent summer was spent in an environment quite different from Tassone’s company: Ford Motor Company. Even with his family home just an hour or so from Detroit and his grandfather a lifetime career GM’er, Steltenkamp had never given much thought to eventually taking his mechanical engineering skills to Detroit. After completing his product development internship, during which he analyzed the Lincoln Continental in terms of customer experience, Motor City is now on his radar.

Definition of a Scholar-Athlete

While the future seems to hold much promise for him, Steltenkamp is very much a man who lives intensely in the moment. A GPA of 3.91 in his major attests to his mental agility when facing the competing demands of school and sport. An article in his high school newspaper, in fact, once described him as having “put the scholar back in scholar-athlete.” How does he do it?

His wrestling teammates, who immediately became his “25 best friends” on his very first day at Penn, provide a robust support system. His professors, if not exactly wrestling fans, seem to be on his side, cognizant of his heavy course load and his travel and workout schedules.

Steltenkamp’s academic advisor, Katherine Kuchenbecker, Skirkanich Assistant Professor of Innovation, and a national championship volleyball player while at Stanford, is especially mindful of his double life. He notes that Kuchenbecker even now forms her MEAM design classes into teams.

Also in Steltenkamp’s corner are his parents, both teachers, who instilled in him the importance of taking his education seriously. At the same time, his father, a discus thrower at Michigan State, never questioned his son’s consuming involvement with athletics.

With a personal team like that, nine-to-five drive and the gift of passionate dedication, perhaps everything else in life is easy because of wrestling.