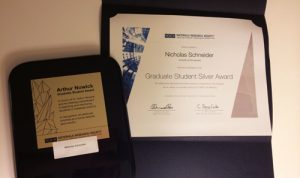 Nicholas Schneider, doctoral student in the laboratory of Haim Bau, professor in the Department of Mechanical Engineering and Applied Mechanics, is the recipient of two awards from the Materials Research Society (MRS): the 2013 Silver Award and the 2013 Arthur Nowick Graduate Student Award.

Schneider is a recipient of the Silver Award for the presentation of his project, “Visualizing In Situ Electrochemical Deposition and Dendrite Growth with the Nanoaquarium.” MRS Graduate Student Awards are intended to honor and encourage graduate students whose academic achievements and current materials science research display a high level of excellence and distinction. MRS seeks to recognize students of exceptional ability who show promise for significant future achievement in materials research and education.