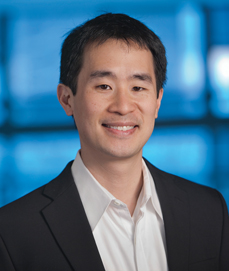 Penn Engineering is pleased to announce the appointment of Christopher Fang-Yen, Ph.D. as assistant professor in the Department of Bioengineering.

Dr. Fang-Yen obtained his Bachelor of Science in Physics and Mathematics from Stanford University in 1995 and his Ph.D. in Physics from the Massachusetts Institute of Technology in 2002. He comes to Penn Engineering following a postdoctoral fellowship in the laboratory of Aravinthan Samuel in the Department of Physics at Harvard University.

Dr. Fang-Yen’s research explores how neural circuits generate behavior using the nematode C. elegans as a model. This 1-mm-long worm has only 302 neurons, and is the sole animal for which the complete ‘wiring diagram’ of synaptic connectivity has been determined. This relative simplicity of the worm’s nervous system, as well as its genetic manipulability and optical transparency, make it a unique model for understanding the neuronal basis of coordinated behavior. The laboratory adopts a multidisciplinary approach, applying and integrating tools from fields such as optics, molecular biology, microfluidics, and machine learning. In particular, Chris and his collaborators have recently developed a closed-loop system for optogenetic spatiotemporal control of neural activity in freely moving animals. Chris is also broadly interested in creating new tools for neuroscience and bioimaging.