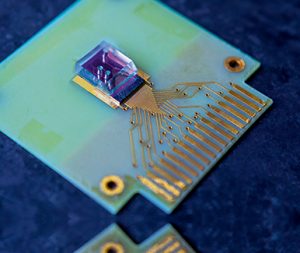 Before joining the Penn Engineering faculty, David Issadore was immersed in a quantum mechanics problem at Harvard University. However, during this time he found his mind wandering to the lab next door, which was building miniaturized diagnostic tools for disease. After talking with the students in that lab about their research, he was hooked, and decided to switch from studying theoretical electron behavior to studying a way to design a portable disease detection tool.

“It’s very appealing to work on projects that are both interesting and could have an enormous impact in helping people,” says Issadore, assistant professor in Bioengineering.

After graduating from Harvard in 2009 with a Ph.D. in Applied Physics, he has been focused on revolutionizing medical tools and hasn’t looked back. At Penn since 2012, Issadore has built a microchip that marries technologies from the fields of microelectronics, nanomaterials and microfluidics in order to measure biomarkers for conditions such as tuberculosis, flu, cancer and traumatic brain injury with a simple test. Issadore hopes the design of this “lab-on-a-chip” and its hand-held reader will do for medical diagnostics what cell phones have done for telecommunications: bring a sorely needed service to people living anywhere, even in remote and developing areas of the world where full-scale laboratory operations are not yet feasible.

“The type of semiconductor technology we are using allows us to build extremely complicated things at low cost,” Issadore notes. “Patients in some areas have to wait days to receive medical test results. But if you’re able to take that process and put it into a package that looks like a cellphone, you can bring the diagnostics to the doctor’s office, the pharmacy, or even the patient.”

One of Issadore’s goals is to detect rare cells, such as cancer cells that circulate in the blood and are hard to differentiate from healthy cells. His project deals especially in pancreatic cancer, which can spread early and aggressively and evades most modes of detection.

“By developing a new tool that can measure pancreatic cancer cells in blood, there is a great opportunity to both catch the disease earlier and to understand it better,” Issadore says.

His diagnostic chip picks out the cancer cells with the help of magnetic iron oxide nanoparticles, which are engineered to stick only to the cancer cells’ distinct surface proteins in a blood sample. Magnetic field sensors identify these cells using a technique similar to a computer’s hard drive scanning data. Additionally, he and his group are developing a chip to isolate pancreatic cancer cells so that each of these cells can be studied one at a time. As the cells move one-by-one over the sensors, strong magnetic traps pull them aside from the rest of the blood for a closer look.

In collaboration with the Perelman School of Medicine’s Ben Stanger, associate professor of Medicine in the Division of Gastroenterology, and Erica Carpenter, director of the Circulating Tumor Material Center, Issadore is applying his diagnostic device to samples from mice engineered to carry human pancreatic cancer. The team hopes they will be able to translate what they learn to clinical trials in about a year.

Combining microfluidics, microelectronics and nanomaterials in this way results in a “beautiful” technology, Issadore notes, because it’s compact and accesses biological matter previously too tiny to measure.

Enter exosomes, tiny lipid membrane spheres about 100 times smaller than cells. Previously, scientists thought they were simply cell debris, but it turns out that exosomes, which circulate throughout the body, carry a wealth of information from the cells that shed them.

“The great thing about exosomes is they’re so small they just get everywhere. In a blood sample, you can find exosomes originating from all over the body,” Issadore notes.

Using his technique for exosome detection could enable diagnostics for cancers in hard to access deep tissues, such as ovarian or brain cancer, without the need for invasive procedures. They also can carry markers for brain injury, a condition that’s hard to diagnose. The team is also working on detecting infectious diseases, mainly tuberculosis, whose bacteria are present in phlegm. An effective and inexpensive test for its early detection is hard to access in developing countries, where the disease spreads rapidly and can resist antibiotics.

A Teacher at Heart

Issadore’s talents aren’t confined to the lab. Both undergraduate and graduate students praise his ability to break down difficult concepts and his genuine interest in helping others grow intellectually and professionally. Max Wasserman, an undergraduate student, is part of Issadore’s team. He’s impressed by the professor’s mentorship and dedication to helping students expand their learning outside of the classroom.

“At any time of the day, you know he’s willing to talk about any of your ideas or questions without hesitation,” Wasserman says.

Issadore is currently teaching freshman chemistry and a junior lab course on bioinstrumentation. This past spring, the undergraduate student body and the Engineering Alumni Society presented Issadore with the S. Reid Warren, Jr. Award, given annually in recognition of outstanding service in stimulating and guiding the intellectual and professional development of undergraduates.

“He encourages his students and is easy to work with,” notes doctoral candidate Jin A. Ko. “He is highly involved in the lab’s work, and this motivates me to work hard.”