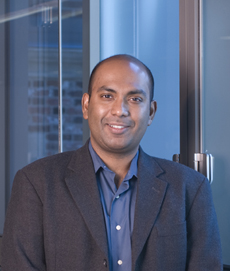 Tiny engineered particles that can hold molecules in their hollow interiors can be targeted to specific tissue types by means of the antibodies on their exteriors. Because the choice of antibodies determines what they can bind to, these nanocarriers can serve as markers or deliver a payload of medicine to diseased cells, while ignoring healthy cells.

But to get their medicine into cells, nanocarriers must bind to the cells long enough to be engulfed. Bioengineers assumed that particles with more antibodies would bind better, but they were not basing the design on rational foundations.

A Penn team led by Ravi Radhakrishnan, associate professor in Bioengineering and in Chemical and Biomolecular Engineering, was recognized by the National Science Foundation for the development of computer models that will be instrumental in improving the design of nanocarriers.

The researchers developed a multifaceted simulation that allowed them to test binding under various conditions such as the force that flowing blood exerts on a nanocarrier in a narrow capillary and a wide artery. They then populated these simulated environments with nanocarrier models, altering their sizes and the amount of antibodies on their exteriors to see which arrangements were optimal for binding to diseased cells.

“We started this project to provide a more rational approach to design,” explains Radhakrishnan, who notes that previously, researchers used inherently inefficient trial-and-error methodologies. “Because of the tools available to us as engineers, we wrote computer models that would be able to guide design principles.”

Targeted drug delivery is one of the more enticing applications of nanotechnology; by designing pharmaceuticals at the nanoscale, engineers hope to get them to attack diseases with newfound precision and efficiency. For this project, Radhakrishnan worked collaboratively with other researchers at Penn, including Portonovo S. Ayyaswamy, Asa Whitney Professor of Dynamical Engineering in MEAM; David M. Eckmann, Horatio C. Wood Professor of Anesthesiology and Critical Care at the Perelman School of Medicine; and Vladimir Muzykantov, professor of Pharmacology at the Perelman School of Medicine.

Radhakrishnan’s research lab, the Molecular Systems Biology Lab, works at the interface of chemical physics and molecular biology. The students who work in the lab attempt to provide atomic- and molecular-level characterization of complex biomolecular systems and to formulate quantitatively accurate microscopic models for predicting the interactions of various therapeutic agents with innate biochemical signaling mechanisms. To do so, they employ several computational algorithms across various lengths and timescales, in conjunction with engineering principles of thermodynamics and transport, and high-performance computing.

“The essence of an inherently engineering approach is to seek creative solutions through rational and quantitative foundations,” says Radhakrishnan. “In my lab, we strive to adopt this paradigm in a collaborative and interdisciplinary setting in order to impact biomedical applications.”