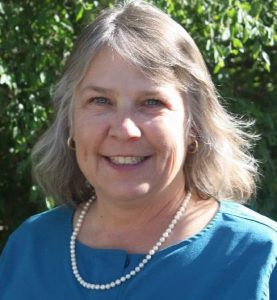 Penn alumna (CBE’86), Professor Kimberly Ogden (formerly Kim Henry), is currently serving as President-elect and will take over as President of AIChE in Jan. 2019. After receiving her B.S. degree, as one of our most active student leaders and as lab assistant in our undergraduate laboratory, she pursued her M.S. and Ph.D. degrees at the University of Colorado, working with Professor Rob Davis on recombinant bacteria in continuous fermentations using controlled flocculation and recycling. Shortly thereafter, in 1992, she began teaching at the University of Arizona in the Department of Chemical and Environmental Engineering.

With focused research on bioremediation of organics in contaminated soil and waste-water streams in the semiconductor industries, and optimization of pharmaceutical fermentation processes, Kim rose to Full Professor and Director of the Institute for Energy Solutions. One of her foci was on bioreactor design for production of alternative fuels and bioproducts from algae. Most recently, she was appointed the Interim Vice President of Research at the University of Arizona, responsible for overseeing its $622 million research program. She is leading a research strategic planning process and is heading their Research, Discovery & Innovation (RDI) Office.

Beginning as a Penn student, Kim played an unusually active role in AIChE. As a young professor, she chaired the Student Chapter Committee. In the early 2000’s, she was elected to the AIChE Board of Directors. This led to her active role in the AIChE Education and Accreditation (E&A) Committee – often serving as an accreditation visitor. During this year, as President-elect, an updated mission and vision statement is being prepared, with expanded societal and educational missions, including programs like Engineers Without Borders (EWB) and process safety education.