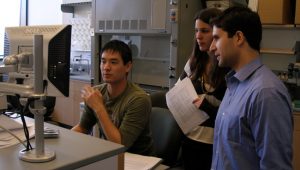 The rapid advancement in our understanding of the regulatory and signaling pathways responsible for cell growth, differentiation and death has led to the identification of many anomalies in the genome and proteome that can be associated with disease. The research of Andrew Tsourkas, associate professor of Bioengineering, focuses on developing nanosensors that can be used to non-invasively image those molecular markers of disease in a clinical setting.

Tsourkas’ Cellular and Molecular Imaging Lab, located in Skirkanich Hall, develops probes that target a wide range of biological processes, including gene regulation, mRNA localization, protein expression and enzymatic activity. Tsourkas and his students use multiple imaging platforms, including magnetic resonance, fluorescence and bioluminescence. Applications for this work range from studying the complex intracellular dynamics of individual cells to the early detection of disease.

One particular example is the non-invasive imaging of cancer biomarkers in living subjects. The images can provide a powerful technique for locating metastatic disease, staging tumors, evaluating the availability of therapeutic targets, and monitoring the efficacy of treatment.
“Magnetic resonance imaging [MRI] is a particularly attractive platform for such molecular imaging applications, because of its ability to acquire high-resolution anatomical images in conjunction with measures of biomarker expression,” notes Tsourkas.

A major obstacle faced by MRI, however, is overcoming the relatively low sensitivity of targeted contrast agents. In general, the number of cell receptors at a disease site is too low to recruit enough MRI contrast agents to generate sufficient contrast. Therefore, there remains a need to develop new imaging agents capable of generating higher contrast and/or novel amplification strategies that will result in improved targeting.

In addition to its projects aimed at imaging disease sites in vivo, the lab also is using nanoparticle carriers as drug-delivery devices. “I believe that the same techniques used to improve the targeting of imaging agents also can benefit the delivery of therapeutic compounds,” says Tsourkas.