Haptics at Penn: A Class of Touch 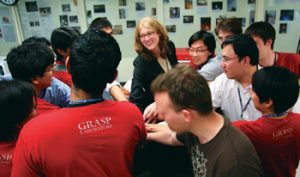 Inside the Towne Building’s Haptics Lab, members of Team Kuchenbecker are bent over their work stations, completely absorbed in individual projects. A question is raised from one of the benches and soon the dynamic changes: a diverse and interesting mix of doctoral, master’s, undergraduate, and high school students gather around a central work table to collectively figure out an answer. Katherine J. Kuchenbecker, Skirkanich Assistant Professor of Innovation in the Department of Mechanical Engineering and Applied Mechanics, would be pleased; she has cultivated and encouraged this kind of collaboration and interaction among her student researchers.

Haptics, as defined by Kuchenbecker, is “the science of understanding and improving human interactions with the physical world through the sense of touch.” As part of the General Robotics, Automation, Sensing and Perception (GRASP) Lab at Penn, her research group investigates haptic interfaces, electro-mechanical systems that allow the user to feel and control a real or virtual environment via a computer. And along with MEAM 147, Introduction to Mechanics Lab, Kuchenbecker teaches MEAM 625, Haptic Interfaces for Virtual Environments and Teleoperation, at the graduate level.

Her Ph.D. work with Dr. Günter Niemeyer at Stanford’s Telerobotics Lab focused on techniques to improve haptic feedback (the feeling of a surface through robotic technology) in virtual and remote interactions. And now, Kuchenbecker is keenly interested in the possibilities of haptic feedback during robotic surgeries. Currently, robot-assisted operations are essentially based on visual information; the surgeon performs tasks remotely with the aid of endoscopic 3-D imaging but cannot feel the tissues and structures that the robot is touching. Kuchenbecker, who in the spring received a prestigious National Science Foundation CAREER Award, envisions a “super-human” robotic surgeon with not only unfailingly steady hands and visual acuity, but also tactile virtuosity.

Jamie Gewirtz is on the case. A second-year student in the three-year-old master’s program in Robotics administered by the GRASP Lab, his work is aligned with Kuchenbecker’s vision. Gewirtz’s background is in science—he majored in biology at Kenyon College and worked as a lab assistant in hematology at the Children’s Hospital of Philadelphia (CHOP) after graduation. At CHOP, when he voluntarily became involved in a side project to improve the efficiency of a lab instrument, it became clear to him why everyone had always commented that he should become an engineer.  When he heard about the “Robo Master’s” program, Gewirtz applied. It seemed the perfect curriculum through which to meld his biomedical experience with his innate technical talents.

Accepted, he began his coursework in the spring of 2008, with Kuchenbecker as his advisor. She describes him as a “natural tinkerer” with a strong inclination to help people perform more effectively. Gewirtz has been investigating ways in which to introduce haptic feedback into the delicate procedures of robot-assisted minimally invasive surgical (RMIS) systems. His current haptics/robotics research relates to the da Vinci Surgical System, a commercial product designed by Intuitive Surgical, Inc. This work was recently chosen as one of five semester-long projects in Gewirtz’s EAS 546 Engineering Entrepreneurship class, which will allow him and three other students to investigate the business potential of this project.

Excerpted from Penn Engineering Magazine: “Haptics at Penn: A Class of Touch,” by Patti Hutchings.