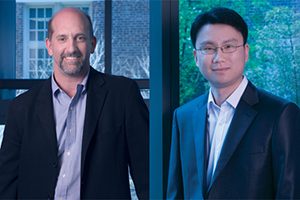 The project, titled “Development of Smart, Responsive Communicating and Motile Microcapsules,” is inspired by theoretical research done by the University of Pittsburgh’s Anna Balazs, who developed particles that communicate with one another to induce “collective motion” – an array of particles move in a concerted way by communicating with one another. Balazs’s theorized that such a system could be realized by using two kinds of particles: senders and receivers. The receiver can either be attracted to or repelled by a sender’s secretion. If the receiver is attracted, it moves toward the sender. If the receiver is repulsed, it moves away from the sender and pulls the sender, causing it to chase the receiver.

These reactions are examples of autonomous movement, which is ubiquitously observed in living things, such as flocks of birds. Hammer and Lee aim to capture the behavior of living things in a synthetic cell – also known as protocell. Their work involves putting uniform-sized capsules on an array and then using an enzyme cascade to get a sender particle to secrete signaling particles and have receivers respond.