Can We Help to Heal Injures Without Causing Scarring? 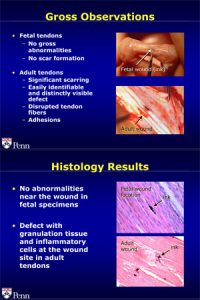 By transplanting injured fetal sheep tendon tissue into an adult environment, Lou Soslowsky and his colleagues in the McKay Orthopaedic Research Laboratory, have astonishingly shown that tendons can heal in a scar-less, regenerative manner rather than through a scar-filled, reparative mechanism, a finding that would greatly benefit our tendons when injured.  Scar tissue formed during the repair process in adult tissue has dramatically inferior properties, such as more randomly oriented fibers, decreased mechanical strength, for example, compared to normal tendon. Because of these deficiencies, scar tissue can interfere with the gliding mechanism between the tendon and its surroundings.  Scarring can also form adhesions that pull in directions that inhibit, stress, or eventually expose other parts of the body to injury. But fetal tendon tissue heals without scarring, a property shown by Soslowsky and his group to be intrinsic to the tendon tissue and not the fetal environment.

This scar-less fetal healing is true not only for tendons, but has been observed in skin, articular cartilage, nerve and bone.  By understanding and harnessing the processes that control and drive the regenerative healing response in fetal animals, Soslowsky and his group hope to improve the clinical treatment of tendon and ligament injuries. THese injuries are so common we say, “My shoulder hurts” (which is most commonly due to rotator cuff tendon injuries); or, “It hurts just below my knee” (which is likely patellar tendonitis); or, “I have tennis elbow” (which is a ligamentous injury).  Tendon and ligament injuries are extremely common among recreational and elite athletes, as well as in the elderly.  Of the nearly 35 million musculoskeletal injuries in the U.S. every year, about 50 percent involves tendons and ligaments. The cost to the US healthcare industry amounts to a whopping tens of billions of dollars a year.   To tackle this enormous problem  requires a strong research commitment like that of  Soslowsky’s lab.

Soslowsky directs the McKay Orthopaedic Research Laboratory,  ranked 5th in NIH funding to orthopaedic departments in the country.  He also heads up the Penn Center for Musculoskeletal Disorders (PCMD), an NIH-sponsored center comprised of about 80 faculty members from five different schools at Penn.  As director of his own lab, McKay, and the PCMD, Soslowsky is well-positioned to foster, facilitate and observe multidisciplinary collaborations at Penn.

Basically, bioengineers in the orthopaedic field, he says, play a critical role when it comes to repairing tissue like bone, cartilage, meniscus, spinal discs, tendons or ligaments, for they must answer the surgeon’s questions, “Is it strong enough and will it withstand the mechanical loading environment in my patients?”

Because the end goal is not just to understand how the tissue behaves; or how it got that strong; or how to make it stronger (all very important), but ultimately to treat a patient, Soslowsky’s research involves surgeons and various scientists from different disciplines at the very start of a new investigation.  In addition to a bioengineer or two, his teams often are made up of an orthopaedic surgeon, an imaging scientist, a molecular biologist or biochemist, a Ph.D. bioengineering student, an orthopaedic resident, and a BE undergrad.

The surgeon provides her/his most precious resource, time (time spent away from patients in the clinic or operating room) to collaborate, and if she (or he) is interested in doing that, it gives Soslowsky confidence that the research is important and applicable to real-world clinical problems.  Almost every project about the repair process raises questions of structure (how the collagen matrix is organized), biology (what the cell types are and what growth factors or cytokines are active), and mechanical loading (how strong the repaired and/or engineered tissue is and how it behaves mechanically under complex loading).  The key is to perform these multidisciplinary studies with high rigor, which requires extensive expertise.

Currently, McKay has more than 65 people, more than half of whom are bioengineers, working on about 35 different research grants.  They are looking at the problems of orthopaedic tissue injury and repair to understand how fetal tissue self-repairs and to foster that process in different ways—from tissue-engineering with biologically seeded scaffolds to examining the role of the protein IL-10, to the effect of hyaluronic acid receptor interaction in healing.