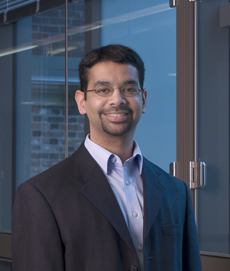 One of the ongoing challenges in cancer detection and therapy is to target imaging agents and deliver toxic drugs only to tumor cells and not to normal cells.  To achieve this critical selectivity, Casim Sarkar, assistant professor of bioengineering, is targeting protein antigens that are uniquely or abundantly expressed only on the surface of tumor cells. Because often there are no known natural protein-protein interactions that be can be exploited, Sarkar and his Molecular Cell Engineering Laboratory (MCEL) are trying to engineer new proteins to bind specifically to tumor antigens.

Conversely, in many autoimmune and infectious diseases, harmful protein-protein interactions occur in the body.  To treat these diseases, Sarkar’s group is developing new proteins to interfere with these harmful interactions.

To create a protein that behaves in a particular way or tweak the properties of an existing protein through a process called directed evolution, Sarkar uses a technique known as ribosome display, which he brought to Penn from his post-doctoral work in Switzerland.  “The method,” Sarkar explains, “adapts the principles of natural selection and applies them at the level of individual proteins.”  However, unlike natural selection (e.g., in vertebrate evolution, which happens on a timescale of millions of years), directed evolution using ribosome display allows Sarkar to select for proteins that perform a desired function in a matter of days or weeks.

To direct a protein’s evolution, Sarkar introduces random errors into the protein.  Then he applies a selection pressure that rewards only those protein variants that satisfactorily perform the desired function—for example, binds to a specific tumor antigen.

Since Sarkar can select the beneficial mutations in the protein sequence, the exact mutations can be tracked in this evolutionary procedure.  Not only does this technique enable Sarkar to make better proteins, it also gives him detailed data on the mutations to understand why they are better, furthering knowledge about how such proteins behave.

Beyond engineering individual molecular interactions to treat disease, Sarkar’s group is studying cell decision-making by analyzing and building complex networks comprised of many such molecular interactions.  The nascent field of synthetic biology—making biological molecules and networks from scratch, either with natural or synthetic parts—”has the potential,” Sarkar says, “not only to further our understanding of biological systems, but also to revolutionize biofuels, biosensing, and cell-based diagnostics and therapeutics.”