BE Seniors Take on the Flu to Win Design Competition 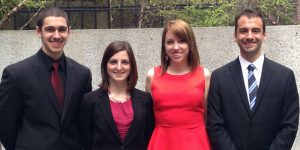 A quick and accurate flu diagnostic, developed by Penn Engineering’s Bioengineering Senior Design team, has the potential for world-wide impact.

According to the World Health Organization, influenza epidemics result in 3 to 5 million cases of severe illness, and about 250,000 to 500,000 deaths annually. Appropriate influenza treatment is hampered by diagnostic tools that are either rapid or accurate, but not both. The winning students developed a best-of-both-worlds technology: a microfluidic device that, applied using a standard nasal swab technique, uses fluorescence to quickly identify influenza-infected cells.

“We think the device will make a very significant impact on diagnosing and treating flu,” says team member David Gabrieli. “With the flu, both recovery time and symptom intensity improve when appropriate medication is prescribed quickly. In addition, the diagnostic could be able to curb the overuse of broad spectrum antibiotics.”

The impact of the design registered with the judging panel of the school-wide 2014 Penn Engineering Senior Design Project Competition. The judges, who represented a diverse set of technology disciplines, awarded the students first prize in the competition. A video of their presentation is available here.

“We were really excited to win the SEAS Senior Design competition,” says Gabrieli. “We knew that we had a great project, but we never expected to win.”

What the team did expect was a full year of work on the project.

“We spent the whole academic year working on the test,” explains team member Liz Feeney. Early in October, the team had its first win, when the project’s underlying technology—RNA fluorescence in situ hybridization (RNA FISH) within a microfluidic chip—worked within five minutes.

“We spent the rest of the second semester optimizing conditions, improving ease of use and creating software for use with our device,” says Feeney. 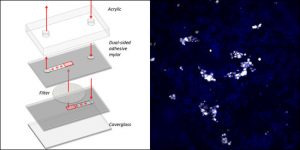 Above left: A schematic that shows each layer of the device and the flow of fluid between them. Above right: a flu-infected sample of cells.

Optimizing the technology included creating an algorithm to define cell contour with the nuclear image, making it possible to overlay the cell contour on the probe image to see which cells have the viral RNA. This makes it possible for the test administrator to count the cells in the nose swab that are infected, making quantitative diagnosis possible.

“These features were much more complicated and presented issues, but we were able to make progress in all of them, if only in terms of proof of feasibility,” says team member Camilo Bermudez. “The greatest surprise was the robustness of the RNA FISH protocol that we were working with. No matter how we modified it and adapted it to our device for more and more intricate purposes, we still obtained excellent images, which was both surprising and encouraging.”

All of the team members agree that their success was underpinned by the expert advisement of their mentors: Arjun Raj and David Issadore, both assistant professors of bioengineering; and Sydney Shaffer, an MD/PhD student at Penn Engineering and the Perelman School of Medicine, on whose work the project was built.

“It is incredibly fulfilling to watch a team of young researchers/engineers work on developing something themselves. As much as they learn from me, I learn from them,” says Raj. “They bring a fresh set of eyes to the problem, and sometimes we are so set in our ways that we can fail to see new solutions that they are willing to try.”

An application for a provisional patent has been submitted for the device, and while the seniors are moving on to graduate study, Raj, Issadore and Shaffer will continue with development.

“We really hope that we can turn this project into a viable clinical diagnostic,” says Raj.” We are planning to work with manufacturers to figure how to make the devices at scale and are hoping to try it out in clinical samples in the near future.”