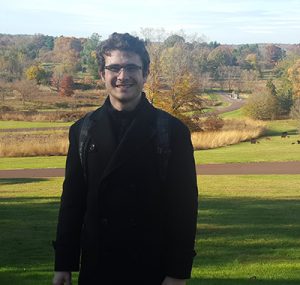 Alexander George, senior in Chemical and Biomolecular Engineering, is the recipient of the Donald F. and Mildred Topp Othmer Scholarship Award from the American Institute of Chemical Engineers (AIChE). This award is a scholarship of $1000 and is presented by the AIChE on the basis of academic achievement and the student’s involvement in AIChE student chapter activities.

While a student at Penn, Alex has worked in the laboratory of Daeyeon Lee, professor in Chemical and Biomolecular Engineering, where he focused on developing gradient stiffness agarose gels in order to test bacterial mechanotransduction. During the summer of 2016, he held a supply chain position in contract manufacturing at GlaxoSmithKline Consumer Healthcare, where he concentrated on developing automation tools in Microsoft Office and Visual Basic for Applications (VBA) to improve and optimize office workflows. He also worked on database creation, UI design, and database design. Following graduation, Alex hopes to work in the pharmaceutical manufacturing industry as a process engineer.

In the Penn Chapter’s nomination letter to the AIChE, it was noted that, “Alex truly exemplifies the ideal of a student nominee for this award who is both academically devoted and an eager participant in student chapter activities.”

The AIChE is the world’s leading organization for chemical engineering professionals, with more than 40,000 members from over 90 countries.