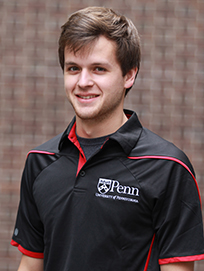 Farabaugh graduated in 2015 with a B.S.E. in Mechanical Engineering and Applied Mechanics (MEAM) from Penn, and will receive his master’s in 2016. After graduation, he will take a position as a Structures Engineer with SpaceX in Hawthorne, California.

Farabaugh was nominated for this award by SAE Fellow Andrew Jackson, Practice Professor in MEAM, in recognition of his outstanding leadership of the Penn Electric Racing FSAE team. Team Captain since 2013, Farabaugh’s leadership was instrumental in the team’s car, REV-1, taking first place at the FSAE Electric Vehicle competition held in Lincoln, Nebraska, earlier this year.

“Adam led the team through conceptual and detailed design of REV-1, and had a large hand in its manufacture, assembly, and testing,” says Jackson, also the faculty advisor for Penn Electric Racing. “The team hoped to be fighting for a spot in the top three in Lincoln this year, but little did they know, they would be the only electric car to finish inspections on the first day, that they would set the fastest electric times in all dynamic events, and that they would win the design and the business presentation events on their way to an overall first-place finish. Throughout the process, Adam was relentless in his efforts not only to finish the car, but also to ensure that younger members took ownership of their contributions so that the Penn Electric Racing program will endure after he leaves. This award is extremely well deserved.”

Farabaugh will be presented with the award as the SAE’s guest during a ceremony at the 2016 SAE World Congress held at the Cobo Center in Detroit, Michigan.

The International Rumbaugh Outstanding Student Leader Award was established in 2002 by Max E. Rumbaugh, Jr., past Executive Vice President of SAE International. Through Mr. Rumbaugh’s generous contribution to the SAE Foundation, the recipient of this prestigious award receives lifetime membership in SAE, an award plaque and an honorarium. SAE International, initially established as the Society of Automotive Engineers, is a U.S.-based, globally active professional association and standards organization for engineering professionals in various industries.